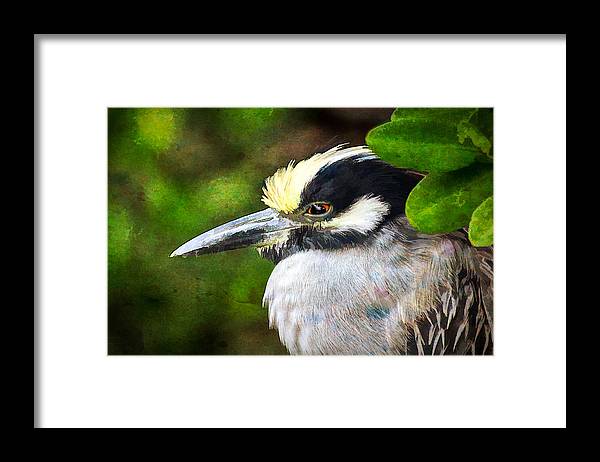 Night Heron 3 framed print by Richard Goldman.   Bring your print to life with hundreds of different frame and mat combinations. Our framed prints are assembled, packaged, and shipped by our expert framing staff and delivered "ready to hang" with pre-attached hanging wire, mounting hooks, and nails.

The yellow-crowned night heron (Nyctanassa violacea), also called the American night heron or squawk, summers throughout the southeastern United States and is year-round along the Gulf coast, Caribbean and north-eastern South America. The birds stalk their prey, mainly at night, eating small fish, aquatic insects, crustaceans, mollusks, and frogs, breeding in swamps and marshes. This is one of 3 different new treatments of the same image that I placed here several months ago.

Looking for the perfect capture remains my quest. To that effect, roaming about with a motor home seems a perfect fit. My wife and dogs and I will be out there whenever possible to capture the views available, and those unique moments to share with our friends and family. Join us in this quest. Richard Websites: RichardJayGoldmanArt.com 2-richard-goldman.artistwebsites.com Email: RichardJayGoldmanArt @gmail.com